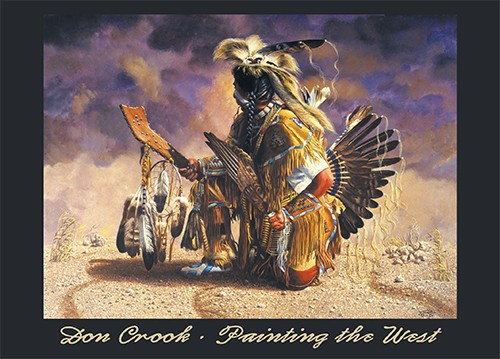 On January 9, 2014, the Larson Gallery at Yakima Valley Community College opend Don Crook: Painting the West.  This exhibition included numerous paintings and prints, including seven paintings from the Lloyd Wiehl Collection detailing the History of the Hanford Reach.  Selections of Crook’s work that has appeared on the covers of audiobooks and magazines will also be on display. Visitors to the exhibit will also be able to view a work in the permanent collection of the Larson Gallery Guild, In Sight of the Pacific.  Don Crook: Painting the West was on exhibit at the Larson Gallery through February 22, 2014.

Known as the “Norman Rockwell of Western Art”, Crook’s work covers historical subjects such as Lewis and Clark, cowboys, and wildlife of the Old West.  His paintings have appeared in magazines including National Geographic and Thoroughbred Breeders Association Magazineand on book covers and in galleries throughout the west. His work has won over 40 Best of Show awards in western art shows.

Seven paintings from the Lloyd Wiehl Collection detailing the History of the Hanford Reach are on display in this exhibit.  This work was recently moved from the present display at the Columbia River Exhibition of History, Science & Technology (CHREST) in Richland to the Larson Gallery for this exhibit.  These commission works appeared in Rotunda of the Capitol Building in Washington, D.C. at the request of Senator Patty Murray, due to their depiction of Washington State history. This exhibit will also show Don Crook’s painting, In Sight of the Pacific, which is in the permanent collection of the Larson Gallery Guild.

Because Crook’s paintings depict western history, students will have the opportunity to explore the United States history through his eyes.  Don Crook: Painting History, a catalog of works of historical subjects will be available for students as part of the curricula for several classes.

This is the first time the Larson Gallery has exhibited western art, and hopes it will be an opportunity for new members of the community to be acquainted with the Gallery