In Sanskrit, the word Ishaan has many meanings: the Hindu God Shiva and the Sun being two important ones.  Ishaan also signifies the northeastern direction and the Īśāna manifestation of the Hindu God Shiva. Ishaan is said to represent peace, knowledge and prosperity. Ishaan is considered the guardian of this sacred direction where the God resides. Raga (literally meaning color or beauty) is a series of musical notes upon which a melody is constructed. Raga is the foundation upon which rests the vast treasure trove of classical Indian music.

“Ishaan Raga” is a melodious offering from the northeast of India. Deepali hails from the beautiful verdant land of Assam, tucked into the north-eastern corner of the Indian Sub-continent. Her paintings are primarily based on the many folk tales of the region as well as the legends of Krishna, one of the human incarnations of the Supreme Divinity in Hinduism. The stories she has chosen to depict are some of the most cherished and abiding in the northeast and indeed in many other regions of India as well. Similarly, the works depicting landscapes and flora and fauna resonate with the natural beauty that the northeast of India is famed for.

Assam is a state in the northeastern part of India, with its own rich history and mythology steeped in tales of magic and folklore. Many of these stories have been handed down generation to generation like beloved heirlooms. They are still told sitting by a fireside on quiet winter evenings by wizened old grandmothers to an eager, wide-eyed, young audience. Deepali has tried to convey the mystique of those ancient stories through contemporary metaphors. 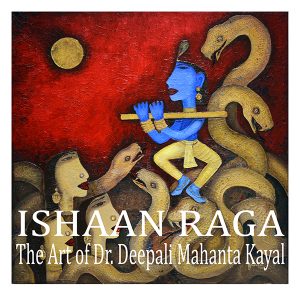 A doctor by profession, Deepali started painting at a young age after she won a national level painting competition. She has honed her skills over a period of time at several places; New Delhi, Jaipur, Chennai, and Guwahati in India. She has explored a variety of forms and experimented with different techniques and styles. Her engagement with various morbid conditions of her patients has not dampened her spirits, but rather inspired her to search for hidden beauty, pathos, and meaning in our day-to-day life. Indian folklore, mythology, and philosophy has been a recurring theme in her work. She firmly believes that art is the quest for self-expression and truth. An artist may live in a moment, but is free to let her imagination transcend all boundaries of time, space, and thought