Making art is a cumulative effort; it takes years to assimilate experience, idea, and desire and transform these phenomena into visual statements.  Viewers might ask: “Well, what is it that motivates an artist to manipulate materials into a work of art?  Why make work out of fiber, bronze, mylar or wood?  How does memory play a role in the making of art?”

“Layered Histories” expands on this discourse through the presentation of work by two artists who live and work in Seattle, and whose roots stem from Eastern Washington:  Lynda K. Rockwood and Gail Grinnell.  Lynda, raised in Randle, Washington, completed undergraduate and graduate work at Central Washington University, and also received a graduate degree from the University of Washington.  Her mother was born and raised in the Naches Valley.  Grinnell, born in Richland, Washington, was raised by parents who migrated from a Midwestern farm community to Washington during the Great Depression and World War II.  Grinnell’s father then obtained employment at the Hanford Nuclear Reservation.  Gail is a graduate of the University of Washington, and currently maintains studios in Cle Elum and Seattle. Gail was awarded residencies by the Fundacion Valarapriso in Mojacar, Spain for October 2007 and the Ballinglen Arts Foundation in Ballycastle, Ireland for February/March 2008.

I first discovered Rockwood’s work in 1997 when I saw her unique two and three-dimensional forms in a Bellevue Art Museum exhibition titledNuclear Cities.  Her work was mesmerizing as it captivated viewers not only by the artist’s fine craftsmanship but also by the numerous layers of meaning evoked by the politically charged and stunningly beautiful works.  Called the Atomic West series, this body of work challenged patrons to rethink the impact of the atomic age on our culture and environment.

Through the years I have watched Lynda’s work evolve as she expands notions of the “organic” and merges idea with material.  The sensuous surfaces of her cast glass, hydrostone, fossil and bronze pieces seemingly chart a geological past that poetically speaks to us in the present.  Time, space, science and the unknown add unconscious ephemera to the experience of viewing each work, whether it be an earlier piece such asAsh to Ash or the more recent work in which elliptical vessel–like forms navigate space both vertically and horizontally.  Sea Urchin Vessel andShell Spiral I are two good examples of the artist’s captivation with the elliptical/vessel forms and evidence her desire to echo the basic natural underpinnings of design and structure that we find throughout nature.  Susan Platt addresses this idea of form and structure in her 2007 essay referencing Rockwood’s Mapping Strata exhibition at the Francine Seders Gallery in Seattle.  Platt states:

“Stratascape I flows through two-dimensional space as an asymmetrical landscape supporting a cast bronze vessel and trilobite.  The real scale of the trilobite anchors the work.  The rough edges of the vessel, created by manipulating the mold, suggest an artifact just taken from the earth.  Inside the vessel is another bronze trilobite, a wonderful contradiction, since the trilobite flourished millions of years before bronze casting began.  Bronze plate, fabricated on a horizontal plane, comprises the larger shape of Stratascape I.  Diagonal cuttings invoke strata.  The undulating lower edge and the roughly cut upper edge imply yet other dimensions.  The rigorous application of layers of patina relies on known and accidental reactions; chemistry to suggest dense sedimentation….

In the four Strataspades, a trowel-like shape supports a glass vessel formed of under fired frit glass creating a texture that suggests granulated snow.  But this “iced” glass glows with color:  chartreuse, light amber, sienna, spring green, olive green, aquamarine, and turquoise.  They mingle, but do not fuse, leaving layers of deposit.”

This sense of layering, by means of stratification, is evident in nearly all of Rockwood’s work.  Her interest in land forms and nature were influenced, in part, by family visits to the Naches Valley, where her great grandfather, William Samuel

Clark, was one of the first settlers.  Rockwood’s exposure to land east of the Cascade mountains, with its sparse, dry landscape, orchards and gardens, formed childhood memories that are subtle but important reminders of how being in both a place of mind and environment impacts one’s work.

For a short period during her childhood, Rockwood’s family also lived on the Oregon Coast where Lynda discovered marine life and fossils on the shore.  Such objects became treasures that she utilized to develop her own “form language,” resulting in mature visual statements.  Her work invites scrutiny and a closer look.  Ultimately, Rockwood’s work layers her personal experience with the rhythms of nature.  Matthew Kangassummarizes this point in his September 1996 Sculpture Magazine review of Rockwood’s exhibition at the Anderson Glover Gallery in Kirkland, Washington:

“Lynda K. Rockwood is good at exploring how sculpture can occupy space in a tentative way yet have a presence that causes the viewer to slow down and look more closely.”

Gail Grinnell’s work, on the other hand, focuses on nature in very different ways, despite the fact that her work shares similar themes with that of Rockwood:  a layering of materials, a visual vocabulary that involves nature, and a passion for making unique and surprising forms.  I first saw Grinnell’s work in a solo exhibition at the Francine Seders Gallery several years ago.  The work I viewed in that exhibition featured drawings on wood depicting tangles of knotted rope–like forms that seemingly snaked over and through the wood grain of each piece.  I was initially attracted by the gutsy use of the wood and loved the dichotomy of beautifully rendered marks on rough-hewn wood planks.  They spoke to me as images of survival and tenacity—threads to family life that at times can constrict as well as unite relationships.

Grinnell has been producing work that layers not only materials like fabric, paint, cloth, collage and paper, but also ideas and evocations of her family history and the layered inner dependencies that mark life.  Several works from her Bitter Love series appear in this exhibition and challenge the viewer to think of them as plant, body, pattern, muscle, tendon, garment, ruffle, or ghostly spirit.  Writer Susan Beal speaks to these issues in a 2006 review of Grinnell’s work:

“….Grinnell’s large-scale organic forms are made up of vintage dressmaking patterns layered with silk and polyester interfacings and overlaid with intricate black-and-white drawings of human anatomy.  Illustrations of sinew, ligament, tendon, muscle, and bone are likened to tailor’s tools, conflating the connectivity of the body with the craft of the clothing that covers it…”

Elizabeth Bryant elaborates on the Bitter Love series in the following excerpt from the exhibit brochure.  She states:

“….her surfaces form a skin both tough and fragile, durable and depleted.  Her figures morph and swell, pulling against gravity like half-filled balloons billowing like laundry on the line, boneless and buoyant as jellyfish.”

Work such as Eddy and Curl evidence this “flowering” departure from the rectangle thus allowing her billowing forms to “float” over and on the wall.  Grinnell’s earlier work also embraced transparency as she combined silk, tissue paper and cellophane to create collages that evoked ethereal laundry hung on a line.  Much of Gail’s work subtly alludes to the quotidian tasks of domestic life.  She married at a young age and raised four children.  Her childhood was impacted by the art of sewing as her mother devoted many hours to this task.  Therefore, the act of making work that utilizes sewing techniques is, for this artist, a life affirming process – connecting her with her past.  Gail states:  “I want the process for making my pieces to be evident, so that when looking at the work one can imagine the movements involved in its making – the repetitive motions for making the work corresponding to the repetitive requirements of being a caretaker”

Layered Histories presents the opportunity to go “beneath the surface” and into the heart and soul of these artists’ work.  The viewer is invited to relish in the contrasting layers of materials (silk to bronze, paper to stone, and polyester to wood) and contemplate the ideas behind the images and forms featured in this exhibition.  It is a pleasure to present the work of Lynda K. Rockwood and Gail Grinnell to our constituency.

Susan Beal is a writer from Seattle, Washington

Elizabeth Bryant is an art historian and writer residing in Seattle, Washington

Matthew Kangas is a writer and art critic living in Seattle, Washington

Susan Platt is a free lance writer, art historian and curator based in Seattle, Washington 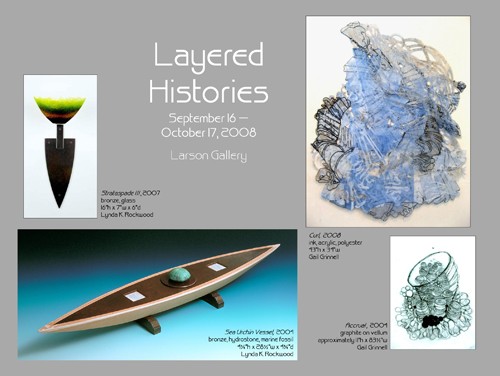